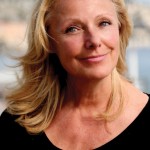 Hillary Davis is the author of Les Desserts, Le French Oven, French Comfort Food, Cuisine Niçoise, and  A Million A Minute. She is the coauthor of the cookbook, The Hamptons Kitchen. She is presently at work on a novel.

Author, food journalist, cooking instructor, and writer—Hillary Davis is a long time food columnist and restaurant critic for New Hampshire Magazine and her work has been featured in the Boston Globe, Connecticut Home Living, Hartford Magazine, Tastes of New England, ParisLuxe.com, eGuideTravel.com, CelebrationNH Magazine, Bonjour Paris, French Entree Magazine, and other regional, national, and international publications. She has appeared on numerous television and radio programs, including Bloomberg Business News, B Sky B Television News in London, CNBC, BBC radio, WMUR-TV (ABC), WCNH-TV (NBC), WBK-Radio, and other local stations in the U.S. She is the author of the critically acclaimed book, A Million A Minute, and has been a food and travel lecturer on Royal Caribbean and Celebrity cruise lines. As a food authority, she is a frequent judge of cooking competitions and a speaker at food and blogging events.

Hillary lived in the village of Bar-sur-Loup, near Nice, for over 11 years, in Paris for 3 years, in London for over 8 years–as well as spending years in New York City and San Diego. She earned a degree in Economics from Columbia University and a graduate degree in International Relations from Cambridge University in England.

She lives in the Hamptons and is also a real estate agent with Sotheby’s in Bridgehampton as well as being a prolific writer.